The Boston Celtics are bound for the NBA Finals, and the championship performance by Bradley Beal Elite alum Jayson Tatum earned him a first of its kind honor from the NBA.

JT was named the inaugural recipient of the Larry Bird Eastern Conference Finals MVP award after leading the Celtics to a Game 7 victory to advance to the NBA Finals for a record 22nd time in franchise history.

“It’s an honor,” Tatum said of winning the first Bird award. “It still doesn’t even seem real right now. I’m just extremely happy and grateful for all of this. Regardless of how long I’ve been in the league, I’m not too far removed from when I was in high school and when I was dreaming about moments like this.” 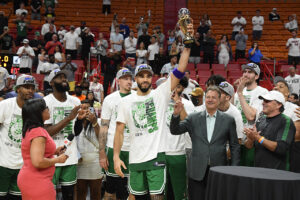 For the series, which went back and forth for the duration before Boston claimed victory in Game 7, JT averaged 25 points, 8.3 rebounds and 5.6 assists per game while playing nearly 41 minutes per contest. The result was the Larry Bird award, and his first NBA Finals trip.

“I still feel like a kid at times, that I’m truly living out my dream,” he said. “I thank God every day just to be in this position to be able to do that. To be the first person to win this award, obviously after Larry Bird, it still hasn’t sunk in yet. I’m going to take it home and show [my son] Deuce and enjoy it.”

The Celtics begin their pursuit of a record 18th NBA Championship in Game 1 of the NBA Finals on Thursday, June 2 at Chase Center, home of the Western Conference Champion Golden State Warriors.