For much of Moses Moody’s rookie season, things have gone much the way they do when a rookie joins a contending team like the Golden State Warriors.

Opportunities were sparse and the learning curve was steep. Moses played in 52 of Golden State’s 82 games, starting just 11. He stepped up and played well when his number was called, but the depth of the Dubs often left the Bradley Beal Elite alum looking on as the Warriors, winners of three of the last five NBA titles, raced to a 53-win season and the third seed in the Western Conference.

But all that changed in the Western Conference Finals. After playing in just two games in each of the first two rounds of the playoffs, and logging just one appearance of more than five minutes, Moses played in all five games of the Conference Finals against Dallas. 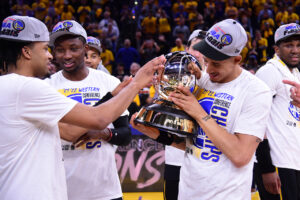 His role grew as the series went on, starting with a decision in Game 2 by Steve Kerr to stick with Moses from the end of the third quarter deep into the fourth, despite the Warriors trailing entering the final frame. When the fourth quarter was set to begin, it was Draymond Green telling the rookie to remain in the game instead of coming out for a veteran.

“It means a lot because I’m sure if they brought it up that they were going to put me in and Draymond said no, it wouldn’t have happened,” Moody said. “He had faith in me to perform in that game, and not even just that, but the fourth quarter of a playoff game and that means a lot.”

The Warriors outscored the Mavs 43-32 in the fourth to win Game 2 and take a commanding lead in the series. From there, more teammates advocated for him and Moses’ role within the Warriors rotation grew.

“He’s always going to be ready,” said Andrew Wiggins. “He’s young, but he gets it. Stays ready, works his tail off. He stays prepared. When he gets in the game, he’s ready and it shows.” 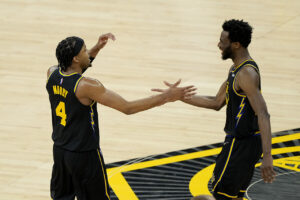 After his success playing just under 10 minutes in Game 2, Moody averaged more than 16 minutes per game over the final three games of the series as the Warriors closed out the Mavericks and advanced to the NBA Finals. Asked about the intensity of the series vs. his appearances in the regular season with the Warriors, Moses said he felt right at home in the playoffs.

“It’s been a lot different from the regular season,” he said of his first taste of the playoffs. “But me being a young guy, I feel like I’ve played in a lot of intense environments, intense games and that’s more of what I’m accustomed to. Coming in and being in a playoff environment feels more normal almost, having every play matter, guys diving on the floor because that’s how I play. That’s how a lot of my people I’ve been around play. This just seems more normal for me, more normal basketball.”

For the series, Moses made 8-of-15 attempts from the field, totaling 23 points with three rebounds, two steals and two assists. He also had a significant impact defensively, defending Dallas star Luka Doncic and the Mavericks’ myriad perimeter shooters with his length and quickness closing out. 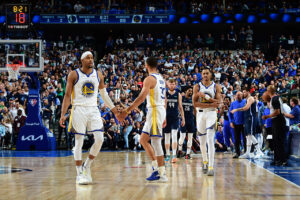 It’s something Warriors guard Stephen Curry, arguably the greatest shooter ever, has seen from Moses all year in practice, and he had high praise for the rookie.

“He’s just an extremely talented, high IQ young guy that works tirelessly to be ready,” Curry said. “You get to a situation where he’s thrown into a Western Conference finals game,” Curry said. “Makes a big difference, plays extremely well. Seems very composed, the speed of the game didn’t overwhelm him. All that stuff matters. It didn’t just happen last week or yesterday. It was from day one when he showed up this summer. So it’s pretty special to see it all pay off for a young guy that works his butt off.”