After three seasons at Ohio State University, E.J. Liddell is headed to the next level.

The Bradley Beal Elite alum announced on Friday that he will be leaving college a year early and entering the 2022 NBA Draft.

A four-star recruit out of Belleville, Illinois, E.J. became one of the first players to wear Bradley Beal Elite across his chest and head to a major college program when he committed to and enrolled at Ohio State in 2019.

In three years at OSU, E.J. played in 92 games, starting 61, while averaging 14.1 points and 6.1 rebounds per contest. After coming off the bench as a freshman, he was a starter for every game of his final two seasons with the Buckeyes, helping lead them to a Big Ten Tournament title in 2021 and back-to-back NCAA Tournament appearances in 2021 and 2022, which likely would’ve been three straight if not for COVID canceling the 2020 tournament.

E.J. is coming off his best season individually in 2021-22, when he averaged nearly 20 points (19.4) and eight rebounds (7.9) per game. He was named to the All Big Ten First Team for the second consecutive season.

He now enters the draft as a likely first round pick with a chance to make an immediate impact at the NBA level. In a social media post announcing his decision, E.J. thanked Buckeye Nation, his family and friends, and specifically Ohio State Coach Chris Holtmann for helping him get to this point. 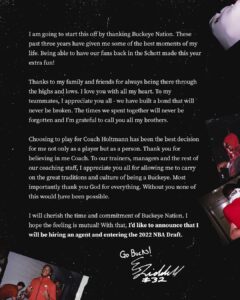