BBE 17U Shines in Runner-Up Finish at Peach Jam

Bradley Beal Elite had a statement to make last week at Nike EYBL Peach Jam in South Carolina, and they did just that, reaching the nationally televised championship game.

BBE would ultimately fall in the title game, a hard-fought 64-61 loss to Team Final, but the impact of a week of competitive games and national exposure that the team received should linger much longer than one loss. 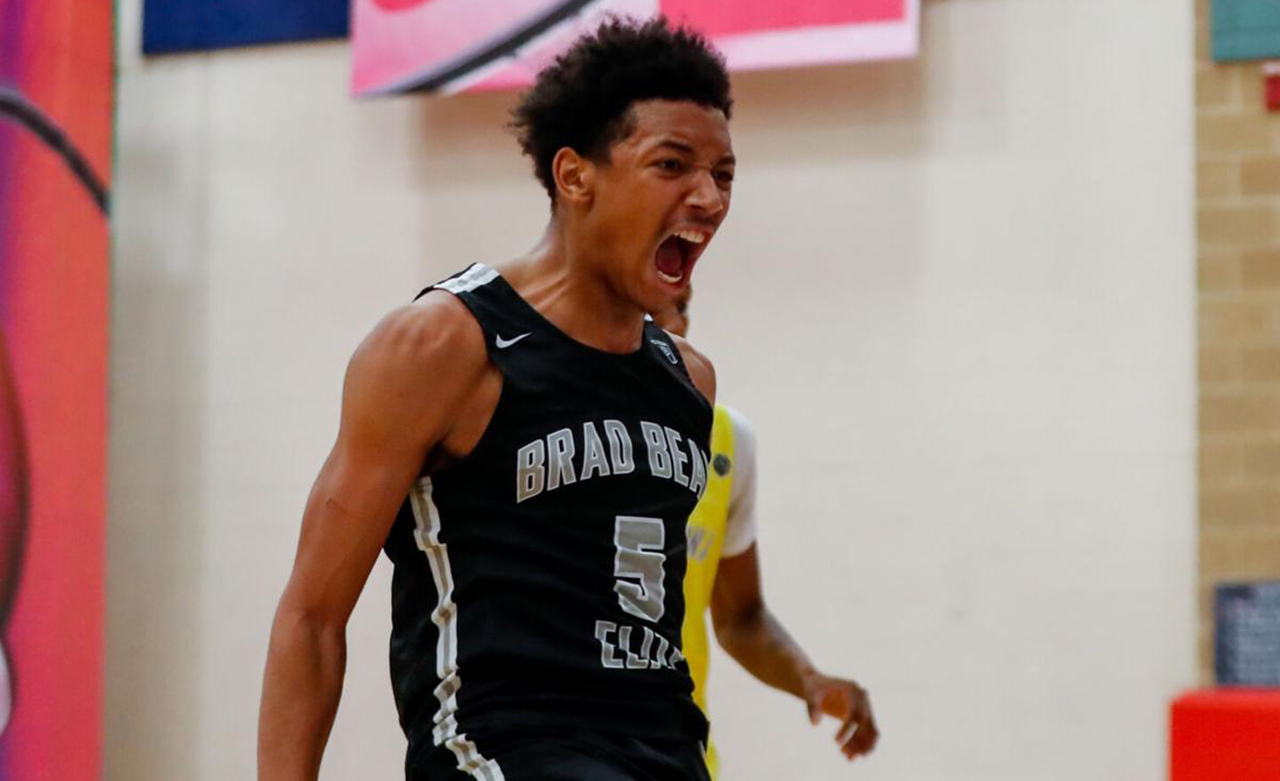 Nick Smith was one of the standout players for BBE in their run to the Peach Jam Championship Match. (Photo by Artie Walker).

The week started in dominant fashion for BBE with three consecutive blowout wins over JL3, Team Takeover and MoKan Elite.

Brandon Miller led the way in those early games. In the 80-54 win over JL3, Brandon was one of five players in double figures with 12 points and also grabbed nine rebounds and doled out five assists, both tying for team highs. In addition, he nabbed four steals and swatted two shots in an all-around phenomenal performance. Nick Smith Jr. led scorers with 21 points while Tavion Banks grabbed nine rebounds, Jeremy Fears dished out five assists and Connor Turnbull blocked four shots.

Miller followed his game against JL3 up with a 13-point, 12-rebound double-double as BBE put the clamps on Team Takeover for a 65-42 victory. Braxton Stacker contributed to the defensive effort with two steals while Robert Lewis matched Miller with two blocks.

The 69-48 win over MoKan Elite had Miller once again posting score-sheet popping numbers with 14 points, nine rebounds and four steals. But it was Smith who stood out the most in that win, with 22 points on 10-of-14 from the floor, along with eight assists, a block and two steals. Nick Kramer added 13 points in the victory.

An early morning game on Friday saw the Elite suffer their first setback of the tourney, a 68-65 overtime loss to Pro Skills. Brandon Miller and KyeRon Lindsay of Pro Skills engaged in a great scoring battle, with Miller dropping 21 points and Lindsay scoring 20. The two players pushed the game to overtime, where Pro Skills edged out BBE sending them to their first loss of the tourney. Miller also had 11 rebounds and three steals, Fears had two steals and Banks blocked three shots.

BBE bounced back later that same day, however, with a 64-54 win over Albany City Rocks. Again it was Nick Smith going off, this time with 30 points on 11-of-14 from the field. Kellen Thames added 11 points and seven boards and Banks grabbed 10 rebounds to send the Elite into the weekend victorious.

The quarterfinal matchup on Saturday morning saw BBE absolutely dismantle NH Lightning 84-53 behind another double double from Miller who grabbed 10 rebounds and led all scorers with 24 points. Braxton Stacker chipped in 17 points, Fears had seven assists and Turnbull blocked four shots in the win.

17u: BBE very impressive in a win over NH Lightening 84-53. Team effort led by 5⭐️ SF Brandon Miller who dominated all around.

That victory propelled Brad Beal Elite into a semifinal matchup with MeanStreets that was much more hotly contested. BBE trailed by five at the break, but used a big third quarter to pull ahead and held on for the victory. Smith, Tavion Banks and Nick Kramer contributed to a balanced scoring attack that saw nine players get on the scoreboard, six scored at least six points, but no one recorded more than 11. Miller grabbed nine rebounds and had five blocks, while Fears had four assists, Turnbull registered four blocks and Banks nabbed three steals.

Man HUGE congratulations to @BradBealElite 17u @RealDealBeal23 for making the 🍑 Jam championship game and being able to play in front of every coach in 🇺🇸 tomorrow on @espn . That’s huge!Go get it fellas @CoachFraz32 @JDouglas_21 📺 #TOUGH😤😤😤 @PaulBiancardi @AdamFinkelstein

In the championship game, BBE faced a battle-tested Team Final and held a 28-27 halftime lead. The match went down to the wire, with the two top squads trading buckets for 40 minutes.

Heck of a Peach Jam Championship. Incredible effort out of both teams @TeamFinalEYBL and @BradBealElite.

Otegah Oweh, Jalen Duren, Corey Floyd, Dereck Lively, Brandon Miller and Nick Smith all stepped up to the challenge and rose to the occasion.

I don’t think you guys understand how much this program means to me and how much it has done for me and a lot others💯 I built relationships that would last a lifetime.. Thank you for believing when nobody else did🙏🏽🙏🏽 @BradBealElite @RealDealBeal23 pic.twitter.com/ZsAKOnGHOf

In the last 15 years of me following the Eagles/@BradBealElite closely, this was easily one of my top 3 teams to follow at the 17U level. Selfless players. A couple 5 stars who play both ends of the floor. Good chemistry mix. Very proud of Coach @CoachFraz32 and his staff tonight

Elsewhere at Peach Jam, the BBE 15U team didn’t qualify for tournament play, but they did get some strong performances. Dallas Thomas averaged nearly 13 points per game over the first three games. Jadis Jones averaged 13.6 points and 9.4 rebounds per game across the tournament and Jobe Bryant averaged 6.4 assists per game. John Bol averaged three blocks per game in the three games he played and Jordan McCullum had a pair of big 17-point games.

Thank you to the @BradBealElite Family, @RealDealBeal23, @NikeEYB and everyone that supported us this Spring/Summer Season and many others. We had some amazing moments on all levels and will continue to stay true to the mission! #FlyHigh.